I think everyone has experienced a situation when you "see" a scene, push the shutter button, and the picture you get is not necessarily what you saw in your mind. I'm not talking about a bad exposure or anything like that. I mean, what you envisioned in your mind was not what you end up with. For me, I find it just requires a change in composition or my vantage point and then I get what I "saw" in my mind. Then there are situations when there is nothing you can do to get what you see in your mind due to things beyond your control. In some of those cases you can create your vision through the wonderful tool that is photo editing software. By no means am I Photoshop guru, quite the opposite. I can't shoot a portrait of you and create a fantasy world where you are hovering over a flower with fairy wings, but there are talented folks who do amazing things like that. I simply use it as a tool to help get to what it was I saw in my mind.

In August I was hired to shoot a car show and I experienced a situation where I couldn't always get what I saw in my mind because of things I couldn't control. As I shot, I made mental notes of a few cars I wanted to shoot for the client without the distractions that come with a car show. If you've never been to a car show there are rows and rows of cars next to one another, signs, vendors, and lots of people walking around looking at the cars. The reflections of these distractions also turn up on the cars' polished exteriors. So I planned to ask a couple the owners to move their cars to another area onsite to shoot them after the show. Halfway into the event, thunderstorms rolled in and the weather was going to be nasty and stay that way through the rest of the day. So I had to shoot as close to what I envisioned (without moving any of the cars) right then and do the rest later in Photoshop.

This first set has the most dramatic differences between images. You can see all of the "distractions" I mentioned. I would have liked to have also shot this De Lorean from the 4 o'clock position, but there was a car to the left (you can see a bit of shadow on the grass) and cars behind it to that side. I also wanted to shoot it from the 8 o'clock position but the car on the left was in the way and there were umbrella stands, vendor tents, cars, and people in the background. So I had to shoot it straight on and reconstructed things later. 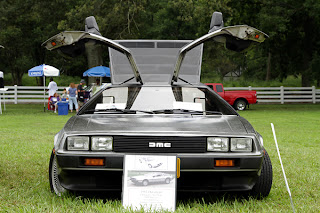 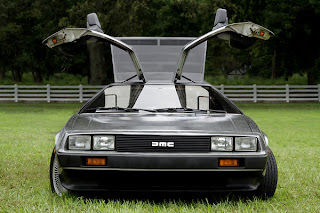 In this photo of a 1966 Camaro, you can see a bit of a gold Stingray Corvette on the left of the image and the obvious green Camaro in the background. As you can tell by the clouds, the storm was upon us and the rain had started. The owner of the car was loading things in the trunk which was why the trunk lid was up and the interior light was on. 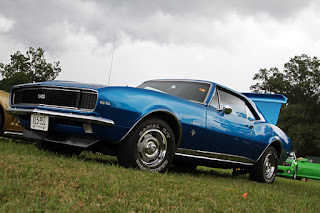 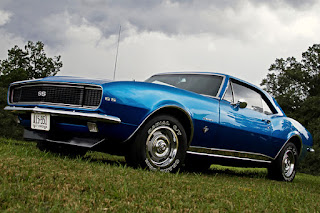 It took FAR, FAR, FAR longer for me to edit things out and create pieces of the image that didn't exist as opposed to doing a couple of quick tweaks with a clean background. I like to get as much correct, in camera, at the time because it means I get to spend more time behind a camera and less time in front of a computer. In the end and under the circumstances, the time spent one these edits was worth it to me to get what I saw in my mind's eye.

If you click on an image all four will pop up in a box at the bottom of your screen. If you click one photo and then the next, it is kind of like a "Photo Hunt" game.
Posted by Brian Callan at 11:11 PM No comments: